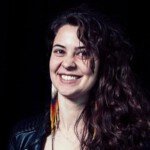 Students and alumni from the Institute of American Indian Arts (IAIA) have been selected to participate in the Indianer Inuit: The North American Native Film Festival which takes place in Stuttgart, Germany, February 6-9, 2020. “Dreams have no borders” is the theme of the festival.

A goal of the festival is international understanding and cultural dialogue. Besides cinema, it offers the audience the opportunity to personally meet and converse with the Indigenous filmmakers. In films, discussions, and conversations new, exciting, and unexpected themes about the culture of North American Indians can be discussed, leaving one-dimensional clichés far behind.

Supported by the German UNICEF Stuttgart, the American Indian Film Institute and Festival in San Francisco, and the Dreamspeakers International Indigenous Film Festival in Canada, the annual Indianer Inuit is the first and only festival of its kind in Europe.

IAIA’s participation in the festival is due to the efforts of current student Erika Knecht, who started working with the Indianer Inuit film festival in 2018 as an intern for her master’s degree program in art history at the University of Cologne.

Knecht primarily assisted the festival director, and while doing so she was impressed with how many Indigenous guests were brought to Germany for the festival. She loved how they formed a community far away from home. After finishing her work for her first film festival, she became an organizing member.

When Knecht first began attending IAIA, she discovered that many of her fellow students had just left their reservation for the first time. She thought that it would be a great idea to have IAIA students and films at the festival in Germany, which would provide them with an opportunity they probably would not have had otherwise.

Upon her return to IAIA in the summer 2018, she had already laid the groundwork to create a collaboration with the Cinematic Arts and Technology Department to send students to Germany to attend the festival. In conjunction with IAIA’s director of advancement Danyelle Means (Oglala Lakota), she was able to finalize the plans.

Additionally, IAIA Alumna Cara Romero (Chemehuevi), a noted photographer, is an invited guest of the festival. She grew up on the Chemehuevi Valley Indian Reservation in the Mohave Desert, and through her award-winning photography she has been able to artistically capture and document the diversity of contemporary Indigenous identities.