Interview with the director of the American Indian Film Institute & Festival in San Francisco and the Canadian Mohawk actress Alex Rice on the occasion of the film festival Indianer und Inuit – The North American Native Film Festival. 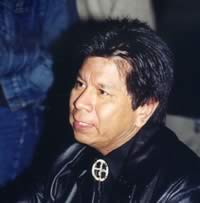 I grew up in a time when portrayals of Native Americans in a positive light in the cinema and on television were few and far between. Admittedly, every so often there were Native Americans to be seen in Westerns but they mostly symbolised obstacles standing in the way of the western world’s progressive way of thinking.

And they were more often than not played by white people with black wigs and make up in their faces. In 1972, a film was made that marked a turning point in this way of thinking: it was Arthur Penn’s “Little Big Man” starring Dustin Hoffman and Chief Dan George. It was the first time that I felt that a positive picture of a Native American was being communicated and furthermore, he was played by a very humorous Indian. It was the first commercial film to make large audiences aware of how wrong the general picture was in America that depicted Indian life.

During this time the idea behind our Native American Film Festival was born, when we asked ourselves: what exactly are these images, circling above us, and how can we communicate positive images of their cultural identity to young people? At that time, it was not easy to find appropriate films; however, by 1975 we had enough material to put a programme together. That first festival was originally planned to be a one-time event, now, 29 years later, we are still going.

Right into the 1970s there were hardly any Native American film-makers. When the first young Native Americans started going to university, they studied Law or Medicine; they did not go to university to make films or to start careers in media. That has taken a long time to change. It has not, however, become any easier to finance films. This year, for example, we had a first in our programme – a film that was made on a budget of 17 000 dollars. The director said to himself: I can either buy myself a new car, or make a film.

He went for the film and we, from the American Indian Film Institute, are here to encourage this kind of person. Unfortunately, a lot of these films go unseen for many, as they are only shown at festivals. And if their makers do enjoy international success, such as Chris Eyre did, for his film “Smoke Signals”, he was then cast-set as a director for Indian topics. As if Chris Eyre did not have enough talent to direct the major films, which possibly have nothing to do with that…

In commercial cinema, the old pictures unfortunately continue to have an effect. It is frustrating when a director such as Ron Howard puts the old cliché up on the screen as he did in “The Missing”. Unfortunately it is this kind of film that provides Indian actors with good work opportunities and the chance to prove their talent. It is sad that a lot of the rubbish that is produced does actually provide for a decent income.

Think about the film “Hidalgo”, where Viggo Mortensen played a half-Indian. We included this film in our programme and noticed the following: in the official information on the film provided by Touchstone Pictures and Disney, the Indian aspect of the film was completely ignored! A well-known actor plays a character with an Indian background in a major Hollywood production and the film is sold based on the story of a White man in Saudi Arabia. That does not make sense, does it?

First Nations Michael Smith and Alex Rice on the Situation of Native peoples in Canada and the U.S.

Alex Rice (30), Mohawk, is one of today` s most important actresses in Canada.
In the course of Stuttgart` s first Native American Indian Film Festival, Rupert Koppold and Michael Weißenborn talked with them about the problems and hopes of their peoples.

Q: Native Americans are economically successful and have improved their educational situation. Is there something like an “Indian Renaissance”?

Alex Rice: The Mohawk are souvereign people, and they have a growing number of educated people among them. In Kahanawake, Quebec, where I am from, we gain information on politics drawing on our own media. We defend our rights and our identity, and we want the Canadian government to pay credit to the contracts sealed with us. We neither long to be Canadians nor Americans.

Michael Smith: Native Communities in the U.S have lived to see an overall renaissance. The National Congress of American Indians – the oldest civil rights movement in the U.S. – is growing and has gained more influence due to the relative wealth of some tribes. Some of the most well-off tribes live in California, where they are able to influence political process. However, it is everywhere in the U.S. that Native populations are growing; they are better at taking issues like health care and police force into their own hands. In other parts of the country, though, there` s still a great deal of poverty, such as at my own Lakota reservation in Montana where the unemployment rate is about 70 %. We cannot run a casino there because that North Eastern part of the state is far too remote. So, the general assumption that all tribes are wealthy is a wrong one.

Q: You have occupied the island of Alcatraz in 1969. In 1973, there was the occupation of Wounded Knee. Are spectacular actions like that still asked for today?

Michael Smith: Yes, the attention of the media is still needed today. When I joined the people at Alcatraz, I was a high school student. I belonged to those young people that were drawn to this kind of actions. Wounded Knee was a symbolical act as well. It touched the flame of many American Indians, and it was the base for their inner growth, even though the plan to make Alcatraz a cultural center was to fail eventually.

Alex Rice: In 1990, my community at Kahnawake and security people were facing one another for 78 days in an armed encounter. This happened when we wanted to stop the extension of a golf course on our land, which is also an old burial ground. The Canadian government sent police and armed troops. We still are in possession of the land, despite the fact that we are not yet entitled to it on legal terms. This is an action that brought together First Nations all over Canada.

Q: Are Mohawks and Lakotas familiar with one other` s culture?

Alex Rice: As an actress, I have gotten to know other traditions. Our languages and songs are different, but our basic values as Native People are similar. We have a kind of fundamental understanding of each other.

Alex Rice: Canadian Indians have better access to health care and cultural programs. In the U.S., the fight for funding of schools and film programs is a much tougher one. But racism is the same problem in both countries. In Québec, for example, the French Canadians want to create a nation withi the Canadian nation. But much of the land they claim for their independent state is really ours.

Michael Smith: In the U.S., more than 65 % of the Native Americans live in urban areas. They have hardly any access to those welfare programs found at the reservations. A lot of Indians are second or third generation urban residents. Their kids have married into other ethnic groups. They don` t profit from support we are supposed to get because they aren`t registered as members of a Native tribe.

Q: Who decides who is an American Indian?

Michael Smith: Every tribe has its own rules. For the government, then, you have to be one quarter American Indian.

Q: Does it hurt to see the same old Westerns broadcast on television?

Michael Smith: Yes, it hurts when by the late 1980s cable T.V. took over and a new generation of viewers were shown those same old movies that had been cast out be the 1970s. These stereotypes – the burning of wagons, the obstacles posed to a god-given takeover of the West-all of that harmed a new generation.

Q: Does the Art of cinema help you to keep in touch with your own traditions?

Alex Rice: Making movies enables me to fuse the ancient culture of my people with my everyday life. For my roles, I bring with me a feeling of my traditions and of who my peoples are. As First Nations, we live in the past and in the present. We can live in our world, but we are aware for our roots. Most people don` t know anything about us. In Hollywood movies, we only exist as Indian trouble-makers. We are invisible. Thus, in our own living-rooms, people act as if we have become extinct. Hollywood is really not interested in getting to know us.