Gunter Lange, is the artistic director of the Indianer Inuit: The North American Native Film Festival 2004 in Europe. 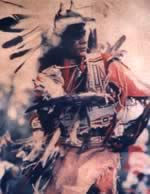 For the very first time in Europe the Indianer Inuit: The North American Native Film Festival 2004 will show the remarkable repertoire of Native American films to the public in Stuttgart (Germany) and Zurich (Switzerland). Supported by the UNESCO and the American Indian Film Institute & Festival in San Francisco the event is scheduled for November 18 – 28, 2004. For over 28 years filmmakers and actors who are of Native American descent have developed the American Indian film into an independent medium of expression. Todays film productions exel in originality and professional quality.

The Indianer Inuit: The North American Native Film Festival 2004 in Stuttgart and Zurich picks up on the very successful film festivals in San Francisco, California (American Indian Film Festival) and Park City, Utah, Gunter Lange for many years is associated with. As event manager he will contribute to the concept and program of the festival based on his long term experience and network of film experts. With his mediation it will be possible to show film productions that in Europe are difficult to access.

The Indianer Inuit: The North American Native Film Festival 2004 will be a forum as well to meet prominent Native American filmmakers and actors, and it intends to introduce the European public to the rather unrecognized reality of Native life and thought. High priority is given to meeting people on a personal level as the best way to supercede the far spread stereotypes of „Indians“.

Besides film programs for adults there will be special presentations for children and youth. It is also intended to initiate acontinuing dialogue between teachers, students and Native American representatives.